I used my little hype about the RPi Zero 2 to rewrite the script I use for testing my overclocking-attempts.
Some things needed a slightly restructuration and I added some features to recognize the used RPis a little bit better.

I added a small check, which stepping of the BCM2711 is soldered onto the PCB. Since a few months, normal Rapsberry Pi 4 Model B can also have a BCM2711 with C0-stepping, instead of the old B0-one.1
The SoC-types for the older RPi2/3 are now also a little bit more precise.

The next thing is optional and just for fun.
Because you can disable ARM-cores (maxcpus=N inside /boot/cmdline.txt), I added a check how many cores are enabled and how many does the used RPi have in total.
The memory-split between CPU and GPU is also given, but since the HWBOT Prime Benchmark2 doesn’t need much RAM, you don’t get crucial information.

Besides the read-out voltage I added a small check, which over_voltage-setting is saved inside the /boot/config.txt.
Normally it’s easier to see which setting is used, instead of calculating the setting by means of the voltage vcgencmd measure_volts is giving.

Tested under the lastest Raspberry OS with Debian 11.1 (Bullseye). 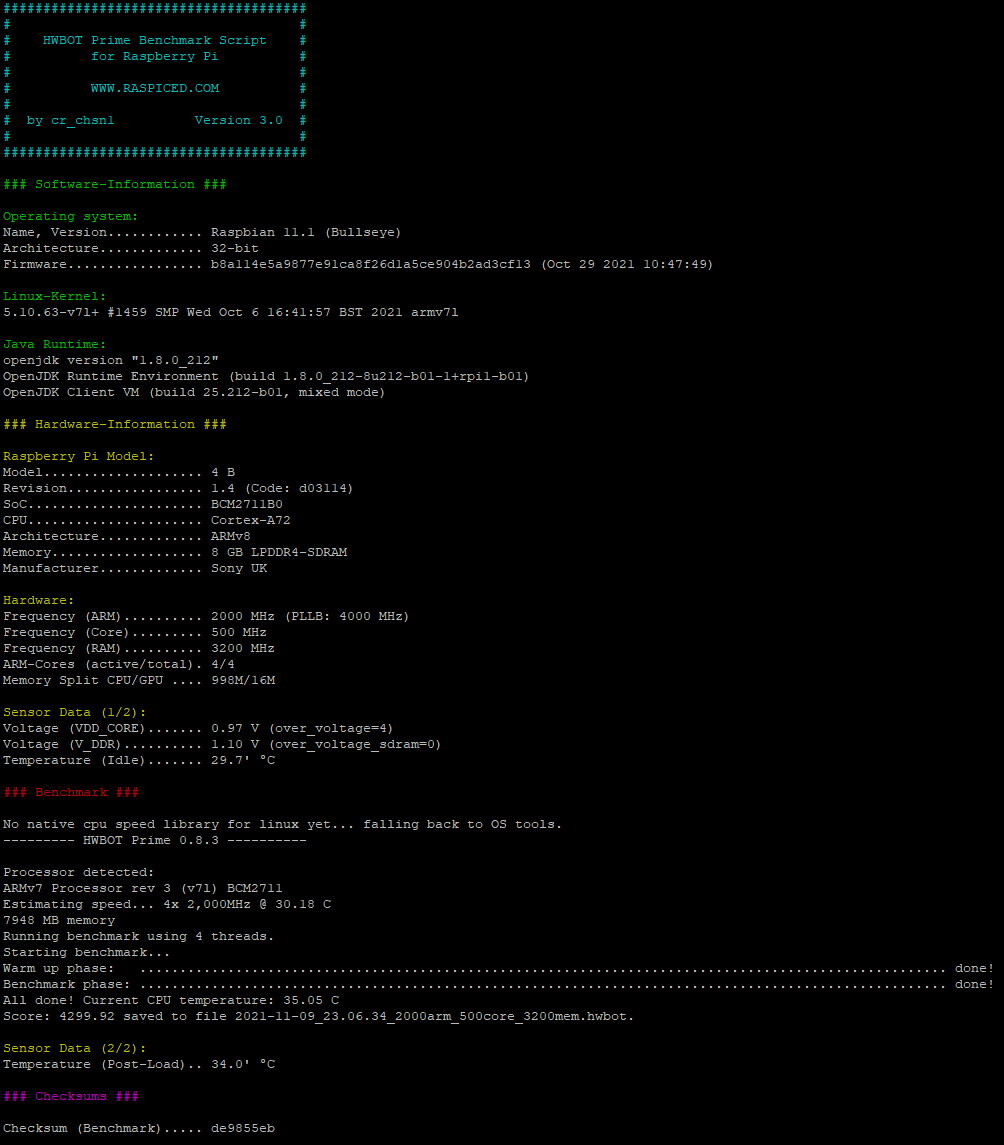 Here I disabled two cores of a RPi4.
In comparison to full four cores you lose about 30 %. 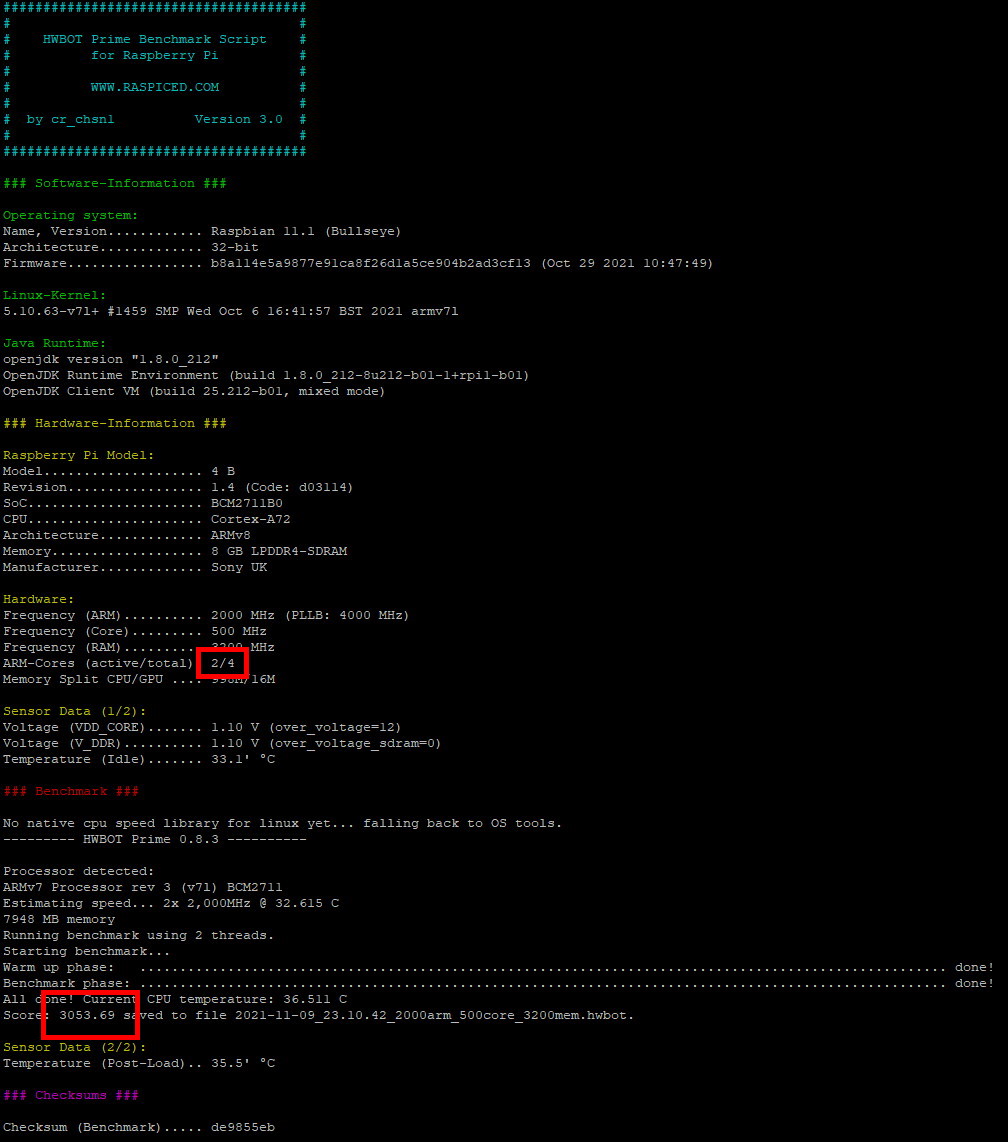 You always can find and download the latest version of the script at my GitHub Gist.3
Alternative: wget https://gist.githubusercontent.com/cr-chsn1/4be02c9bb5e20d4ec124e3503f4cdcd9/raw/rpi_hwbot.sh

I will add minor changes without much talking about. If you want to start an overcloking-session, check if there is a new version available.

I’m really happy to see screenshots and code-snippets of my script, when testing an overclocked RPi and talk about it.
Thanks for using my script!

First of all, if you have a good idea what kind of information is missing and should be part of the script, please drop me a line.
Same thing, if you find a bug. I try to test new versions on some RPi I have lying around, but I don’t test all combinations of models and OS-versions (especially older versions).

Now my reservoir of ideas is almost empty.
Maybe I will test, if I can get the checksum-function to some good use.

I found some time to think about the checksum-function and wrote some lines.
With version 3.1 I’ll check if the benchmark tools (HWBOT Prime Benchmark) and the script itself is downloaded properly.

From now on every script version will download a file with the SHA256-hashes from my server and compare the used files. I tested the script in this combination, so it should run on your RPi as well.

Beside this the script now has a small uninstallation-routine, which deletes the tools and generated benchmark-files, if you don’t need them anymore.
Nothing fancy, it saves some time, if you want to clean up the mess. 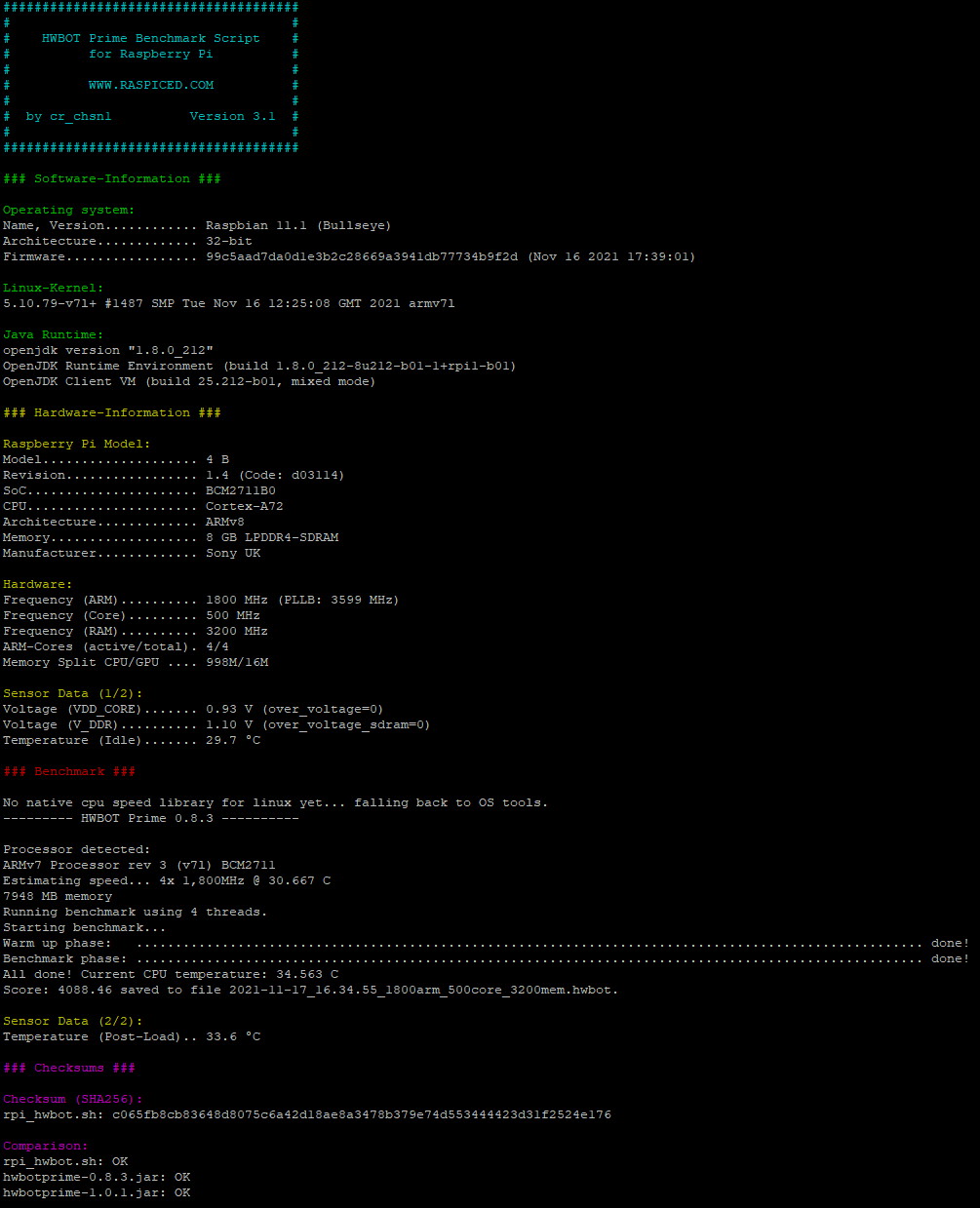